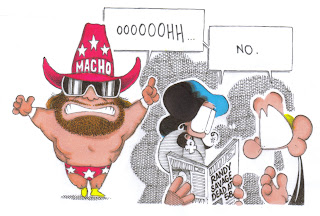 The day-to-day goings-on in pro wrestling (or whatever it's called these days) might not be of much interest to the mainstream news outlets, but when Randy Savage tragically died in a car crash after suffering a heart attack today, it was big, big news everywhere.

Most of the people who control the media not only knew of the "Macho Man," they were probably closet wrestling fans during the height of his popularity. I learned of Savage's death on ESPN radio while driving back to the office after lunch, and quickly turned to WFAN, where the discussion was in full swing. Checking the Internet upon my return to the office, Savage's death was the lead story on cnn.com. Even as I'm writing this blog, I was interrupted by reporters from Newsday and Sports Illustrated looking for my take on Savage's career.

Kostya Kennedy of SI (who did some freelance work for us way back when) asked me what it was about Savage that made him stand out as a wrestler. I really didn't know how to answer that. Was it his talent? I guess that's the first thing that gets any wrestler noticed. But there was something about the man that reached out and touched the audience. Whether they wanted to love him or wanted to hate him, they always wanted him. I supposed that's the best explanation of that cliched "It Factor" that has become part of our vernacular.

Randy Savage was a superstar, a term that we at PWI don't throw around loosely. He wasn't always the nicest of men. In fact, he very nearly got violent with our own Bill Apter over a cover headline on PWI. He later called and apologized, blaming his behavior on "the demons" inside his head.

If anything good can come from his tragic death, hopefully those demons died right along with him.

In any line of work, you always hope that seniority comes with promotions. The longer you work for a particular employer, the more money you make, and the more you will increase your profile.

But that’s not always the case in WWE. As you witness WWE’s latest attempt to repackage Mark Henry and push him as a “fresh” main event act, consider this: Henry—the perennial staple of WWE’s Superstars weekly program—-is the second-longest tenured full-time wrestler on the entire WWE roster. (Author's note: I originally thought him to be the longest tenured, but was reminded that Kane has a year on him.)

Some of WWE’s other longest-working veterans behind Henry aren’t much higher on the cards.

That may not sound right to some of you, considering how long you’ve seen some of the same faces in WWE. But the reality is that the Undertaker and Triple-H are far from full-time performers these days. Other WWE mainstays like Goldust, Christian, and The Big Show began working for WWE more than a decade ago, but have gaps in their WWE employment of at least a year or more. Edge had 13 years of steady employment as a WWE wrestler until suddenly retiring last month.

So what you’re left with is a roster consisting largely of performers hired over the last five years. That can be a mixed blessing.

On one hand, such turn over can help the WWE product feel young and fresh—certainly more so than in TNA, where up-and-comers must feel frustrated as they watch aging wrestling stars from the 1990s nearly monopolize the upper tier.

On the other hand, veteran wrestlers can be an important ingredient in a healthy locker room. Not only can they provide leadership and direction to younger wrestlers, but they can serve as an example that loyalty can pay off, and that it’s possible to have a very long, steady career in WWE.

And, the truth is, that several WWE stars may be well on their way to becoming just those kind of elder statesmen. Although they've only been around for nine years, it's certainly possible, if not likely, that John Cena and Randy Orton will put in another 10 years or more in WWE.

And, although Henry may seem like an exception, the truth is that WWE's most senior employees are typically rewarded with big spots on the card, as evidenced by the list below. But that only makes sense. If WWE thinks enough of a performer to keep him on the payroll, then odds are he's doing something right. If he's under achieving then, well, just ask Shelton Benjamin what can happen.

Those who aren't headlining shows after a decade or more in WWE, but still manage to keep their jobs, don't necessarily have anything to be ashamed of. Skilled veterans like Henry, William Regal and Chavo Guerrero all play an important role in WWE. They help get over younger stars who, one day, may be the veterans themselves.

All that said, here is a list of Top 10 most-tenured, part-time and full-time WWE talent, whose stints in the company have been uninterrupted. (And no, I won’t count the Brooklyn Brawler.)