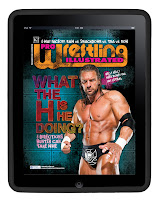 I am so pleased to let you all know that the digital edition of Pro Wrestling Illustrated launched at just about the same time that idiot in Los Angeles pepper-sprayed her fellow Black Friday bargain-hunters at Walmart in an effort to get a competitive shopping edge. You can sample PWI Digital from the comfort (and safety) of your own home. Just click here.

I'm very excited about this new direction for PWI. Working in conjunction with Zinio, the world's largest electronic newsstand, we will now be able to deliver PWI weeks faster and at about half the newsstand price for a single issue. A subscription costs only $3.33 an issue, two-thirds off the newsstand price!

What we have for you right now is the February 2012 issue, which won't be on sale in its print format until the third week of December. Along with that are our last three back issues. One of those is the October 2011 "PWI 500" issue, which is fortunate since the print edition is completely sold out. Another is the January 2012 issue, which is also fortunate because we have a major error in the print edition that has been rectified with an updated page 48.

You will be able to see the cover and table of contents of all four issues. You will also see the remaining pages in thumbnail form, with the ability to enlarge three pages of your choosing before deciding if you would like to make your purchase.

This is just the start for PWI Digital. Beginning with our March 2012 year-end awards issue, we plan to add video links. Check it out now, though. I'd be interested to read your comments.

The Indy Scene Through Fresh Eyes

I tried my best at artfully dodging the question. The thing of it was, Trevor Blanchard, one of the top guys at Purely Obsessed Wrestling World Entertainment, was sitting right across from me waiting for an answer. And it was the second time he’d asked me inside of five minutes. It was still pretty early on a Sunday morning and I was still a little leery of Trevor because he and my wife had teamed up to play a practical joke on me while I was still sleeping off the reverie of the night before. It was a good enough justification to play coy, anyway.

"How many indy shows have you been to?” he’d asked. Here was the guy who – on behalf of Chicago-based POWW – had invited me up to the area and, with POWW’s owner, Jim Blaze, given me the VIP treatment so I could go back and spread the word to PWI faithful far and wide. The truth of it was that I hadn’t seen many indy shows at all … in person, anyway. Counting the ROH show I attended late last year and the Memphis and ICW shows I’d attended back in the territory days, I could pretty well count them all on one hand.  But the POWW roster had given it their all the night before at their biggest show of the year, WrestleRage IX. The last thing I wanted to do was to give Trevor and his crew the impression that I, a dedicated fan of professional wrestling for somewhere around three decades, was some kind of newcomer to the scene.

Yes, I am still a newbie when it comes independent wrestling. I certainly have some found memories of the best territory days of the late-'70s and early-'80s, but when it comes to post Monday Night Wars indy stuff, I am pretty wet behind the ears. But that is, in and of itself, not necessarily a bad thing because the more I see of independent wrestling, the more I like it. In fact, my evening with POWW reminded me about so much of the good stuff in wrestling, including why and how I became a fan in the first place. In short: POWW made a believer out of me, that’s for darn sure.

WrestleRage IX brought some former WWE stars back to the squared circle, including  Scotty 2 Hotty, as well as a “one night only” DX reunion featuring Billy Gunn, Road Dogg. and X-Pac. NWA champ Adam Pearce and TNA’s Robbie E were also on hand for scheduled contests and Lanny Poffo made a memorable appearance representing his late brother, Randy “Macho Man” Savage, for his posthumous induction into POWW’s Hall of Fame. Additionally – and a genuine highlight of the night for my money –  “The Franchise” Shane Douglas made a surprise appearance at the show, cutting a blistering promo that ultimately constituted a broad critique of the current state of this country's two biggest organizations, WWE and TNA. In perfect form and with all the tact of a 10-pound sledgehammer, Douglas let everyone within earshot know what needs to change at the highest echelons of the industry if the business is to survive and stay relevant as a pop culture institution. Most importantly, he put an emphatic exclamation point on the implicit theme of the entire WrestleRage event: Today’s indy scene is wrestling’s wave of the future.

“Big” names from WrestleRage aside, the POWW roster is full of men and women who are so dedicated to professional wrestling and  carry themselves with so much pride that, at first glance, one might well be easily persuaded that they’re already big wheels in the business. Indeed, “The Flyin’ Hawaiian” Kanoa and “Ruthless” Ramon Rodriguez tore down the house with a main event TLC contest that would easily have stood up to any WWE or TNA pay-per-view contest. And at the end of it all, fans received the shock of the evening when all-around bad dude Ruff Crossing crashed the match to cash in his chance at the gold, ultimately scaling the tallest ladder in the building to grab the strap. And all of this came at the end of a card packed with high spots and solid mat work from the likes of wrestlers like Soulbrotha #1, “The Gentleman” John Campbell, Braun the Lumberjack, “Bad Boy” Justin James, SHIMMER’s Sassie Stephie, Nikki St. John, and a host of others. It was certainly a night to remember for everyone who was there.

For my part, I was fortunate to spend some time behind the curtain getting to know some of the class acts who put their livelihoods on the line to entertain their fans. Looking around, I was reminded of one of 1989 review for a buzzworthy new band named Nirvana in which the band mates were described as guys who “…wanna rock, who, if they weren't doing this, would be working in a supermarket or lumberyard, or fixing cars.” True enough, for every wrestling fan who complains that he or she isn’t happy with the product offered by the likes of WWE and TNA, there’s a bright-eyed up-and-coming grappler who spends weekends on the road, wrestling in school gymnasiums, meeting halls, and county fairs. In their real lives, they’re laborers, electrical workers, bouncers, and P.E. teachers. And whether they’re from Philly-based ECWA, APW out on the West Coast, or POWW Entertainment, independent wrestlers see a grand vision through all of their worst pain and greatest triumphs: These are the people who want to bring about a new era in the world of professional wrestling.

Call it a “New Renaissance “of professional wrestling, this fabulous marriage of nostalgia and youthful enthusiasm. This is the era of documentaries like Canvasman and Sadermania, films that unabashedly show the positive side of professional wrestling with tremendous candor and plausibility. It’s the era in which trailblazers like Shane Douglas can speak freely about the need for change in the business and nudge hardcore fans and a confederation of open-minded promoters toward a grassroots movement to reinvent professional wrestling as a powerful and compelling medium that effectively combines athleticism with drama of the highest caliber. It’s the era in which a legion of day laborers and old school veterans compete to earn one of the most coveted of all prizes: respect from peers and fans alike.

From what I saw at WrestleRage IX, POWW is at the forefront of wrestling’s New Renaissance, that’s for sure.

So Trevor, my friend, if you’re reading this, I suppose it’s time to give you my best answer to your original question: How many indy shows have I been to? Not many at all, but I can now proudly say that’s about to change. Consider me an “indy guy” now.