A Very Early Forecast For 2013 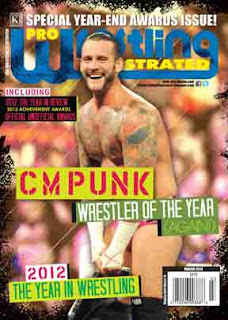 First things first: On behalf of the entire Pro Wrestling Illustrated staff, I’d like to wish all our readers the happiest of holidays and a joyous New Year. We deeply appreciate your loyalty and will continue to bring you the best in wrestling journalism in 2013.

But what will 2013 look like? A few things are already clear: The Rock promises to be a big part of the WWE product beginning next month and lasting (at least) through WrestleMania. There’s a good chance he’ll even wear the WWE heavyweight championship heading into the big show, where many expect he’ll once again face John Cena in a rematch for the ages.

WWE also begins 2013 with a number of relatively fresh acts that could factor into the company’s plans in a big way. Chief among them is Ryback, who came on strong late in 2012. Despite dominating his competition, he’s been unable to capture the big prize. Will 2013 be the year that “Big Hungry” scarfs down a world title?

Still holding on to his Money in the Bank briefcase, it’s a good bet that Dolph Ziggler will finally break through as a true main-event star in 2013. But then again, some people have been predicting that for years.

Otherwise, 2013 is very much a blank slate for the sport. But for the usual suspects, there are no obvious candidates to provide a dream match in TNA and give Jeff Hardy a run for his money as the company’s top star. The promotion is vastly improved from where it was a year ago, but also is not generating the kind of groundswell among fans that’s necessary to contribute to bona fide wrestling boon.

Much the same can be said for Ring of Honor, which is ending 2013 with a whimper instead of a bang. The company’s biggest show of the year, Final Battle, was high on athleticism, but low on buzzworthiness. Sadly, that’s been ROH’s signature throughout 2012, and there’s not much reason for optimism in 2013.

In December 2011, I attempted to predict 2012’s PWI Achievement Award frontrunners a year in advance. I have to say I didn’t do too shabby. Among my predictions: That CM Punk would lead in the Wrestler of the Year category; that Punk and Daniel Bryan would put forth a Match of the Year contender; that the feud between John Cena and The Rock would be among the hottest of 2012; and that Bobby Roode and Kevin Steen would wreak enough havoc in their respect promotions to gain consideration as Most Hated Wrestler of the YTear. You can check my picks against the actual winners inside the pages of PWI’s Year-End issue, available now at www.pwi-online.com.

My crystal ball is considerably hazier than it was a year ago, but, nevertheless, here’s my forecast for the top contenders in PWI’s 2013 annual awards.

2013 Tag Team of the Year: The pool of talented tag teams is far deeper than it was just a year ago, when Kofi Kingston & Evan Bourne struggled to get TV time despite wearing the tag team championship. Today, Team Hell No is one of the hottest acts in all of wrestling. That said, I’d be surprised if Daniel Bryan and Kane were in the running for this award next year. That’s only because I expect both men to return to singles competition before long. Still, there are plenty of other quality tag teams to choose from in WWE. If they can stay healthy for an extended period of time, Sin Cara and Rey Mysterio Jr. have the makings of one of the most exciting duos in years. The Prime Time Players should also shine in 2013. In TNA, the athletic Chavo Guerrero Jr. and powerful Hernandez are sticking to a proven recipe for tag team success. In ROH, which has been long-heralded for its tag team division, the only tandem to really grab my attention in recent months is Caprice Coleman and Cedric Alexander. If they can pry the tag team belts away from the Briscoes, the so-called C&C Wrestle Factory could at least earn a third runner-up spot.

2013 Woman of the Year: It’s been a down year for women’s wrestling, at least in the big national promotions. But there are some things to look forward to. Gail Kim rightfully earned the top spot in our “Female 50” this year, but hasn’t had much depth in her competition. If that changes in 2013, she could be a lock for Woman of the Year. Longtime indy standout Sara Del Rey is now in WWE’s developmental territory. If and when she graduates to the main roster, she should instantly be a contender for the Divas title, and for this award. Then again, who’s to say this award will go to an actual wrestler? After being dumped on by everybody from John Cena to Dolph Ziggler to Vince McMahon, Vickie Guerrero is primed for a makeover as a sympathetic, assertive and (gasp!) likeable female authority on WWE’s Raw brand.

2013 Match of the Year: This is a tough one. With ring masters like Shawn Michaels, Chris Jericho, and Triple-H all retired or semi-retired, WWE will be counting on its full-time roster to deliver the best performances of 2013. CM Punk is the most likely to come through with a five-star classic, especially if given the right opponent and the right stage. The Undertaker at WrestleMania 29 may fit the bill. Speaking of WrestleMania, The Rock and John Cena had an epic match in Miami, but not a perfectly executed one. With a year to work out the kinks, a rematch could be downright flawless. For years now, TNA has been home to some of the sport’s most talented performers, including Jeff Hardy, AJ Styles, Kurt Angle, Samoa Joe, and Austin Aries. Any two—or even three—of those men could deliver a MOTY-worthy performance. It’s up to TNA tell the right story to elevate it to the next level.

2013 Most Popular Wrestler of the Year: As long as John Cena is competing, he’s going to be a top vote-getter for this award (and, strangely, for Most Hated, as well.) If he can regain the WWE championship in 2013, and beat The Rock along the way, he could win over even more fans. Cena’s biggest challenge for this award may be The Rock himself, depending on how active he remains through and after WrestleMania. Ryback peaked too late in 2012 to be a serious threat for this award, but will have all of 2013 to make those “Feed Me More” chants grow louder and louder. Finally in the right role at the right time, TNA’s world champion and top star, Jeff Hardy, has to be considered in the mix.

2013 Most Hated Wrestler of the Year: With the momentum he has going, it’s hard to think that CM Punk will be any less despised a year from now than he is today. Joining him as top vote-getters for this award could be the members of The Shield, either collectively or on their own. If the latter, Dean Ambrose is the most likely to shine as a sinister villain in WWE. A dark horse candidate: Randy Orton, who has clearly been going through the motions for months now as an alleged “good guy” and appears anxious to return to his sadistic former self. In TNA, the members of Aces & Eights have plenty of heat, but it’s going to take some real character development of its individual members for fans to get invested enough to actually hate them.

2013 Feud of the Year: Although the pieces are in place for some hot rivalries heading into WrestleMania, they’ll likely have to last considerably longer to get strong consideration for this award. If Cena and The Rock can rekindle some of the magic of their past war of words, they’ll likely be in the mix. If Brock Lesnar agrees to a semi-regular schedule in 2013, a reignited feud with Triple-H could get very intense. And if Orton returns to the dark side as I predict he will do, WWE may be tempted to go back to the old reliable feud of Cena vs. Orton. That could feel relatively fresh and fun. Of the other two national promotions, the only obvious candidate for this award is ROH’s blossoming rivalry between Kevin Steen and Jay Lethal. Any feud that begins with one wrestler spitting on the other wrestler’s mother is almost a shoe-in for a runner-up spot.

2013 Wrestler of the Year: You know by now that CM Punk won this award for the second time. Although it’s unlikely that he’ll still be holding on to his gold by this time next year, a string of solid performances in WWE’s main-event scene could make him a contender to three-peat. A more likely candidate is Cena, who looks primed to reclaim the WWE championship in 2013 and take on some very big challenges along the way. How about Lesnar? 2002’s Wrestler of the Year surely has the tools to dominate the wrestling world. The bigger question is if he has the motivation to do so. Dark horses include Sheamus, who had a commendable 2012 but was never truly the face of WWE. That could change in 2013. Another is Dolph Ziggler, who is already considered one of the sport’s best performers and could get a matching push in 2013. And then there’s Jeff Hardy, who has long had the skill and charisma to be wrestling’s biggest star, but now may have the clear head to close the deal.

That’s all for me. Once again, on behalf of the entire PWI team, Happy New Year!
Al Castle
Senior Writer